March 24, 2018
After last weeks charts showing over all market weakness, here's the final nail in the coffin. On March 26, 2018, the Chinese will commence trading oil with their oil/gold/yuan futures contracts. These contracts completely circumvent the US dollar. Bottom line, the US petro-dollar is dead! This will start a massive naked shorting of the US dollar around the world. This will lead to a dollar collapse and its related markets. US bond markets and US Treasuries will get hammered, i.e. dumped. This March 26th event will bring the fiat system to its knees. And, this will cause the derivatives to implode, wiping out Deutsche Bank in the center of the storm, along with the banks linked to Deutsche Bank. As we have stated over and over, most analysts are missing the BIG point, we are seeing the systemic collapse of the fiat currency system. This "de-dollarization" will cause huge flows of money into anything NOT related to US dollars, most of those moves will be running into cryptocurrencies! The time for speculation is over, reality is now coming into clear view.

Note the fact that China had ALREADY announced this move to a "gold backed yuan" over three years ago. When China stated that their yuan would be a reserve currency of the IMF, they also clearly stated their yuan would ultimately be backed by gold. The big question is, doesn't anybody READ anymore?? We had reported this fact three years ago and most people refused to believe it. Wishing and hoping simply do not work, reality is what must be dealt with. A new reality starts on Monday March 26, 2018. A dollar collapse is NOW imminent. If you do not own any cryptocurrencies, you WILL suffer huge losses in the near future. There is NO way around this. This last week of March may end up as a massive financial blood bath of epic proportions.

Let's look at the charts. Look carefully, the insiders ALREADY KNOW what is about to happen, and they're running for cover.

This is the US dollar Index. Look at the massive sell off (volume) on Friday! 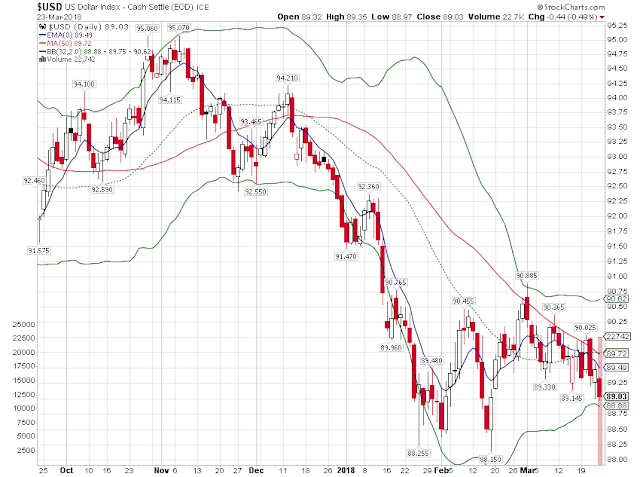 This is Chevron. They started selling off weeks ago anticipating March 26th. 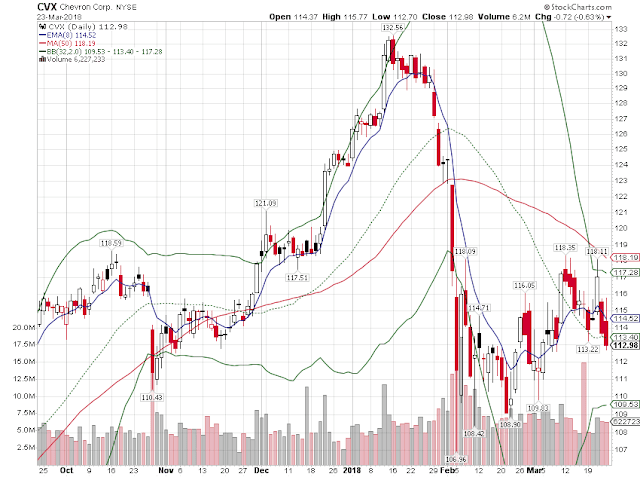 This is Exxon Mobil. Same kind of sell off. 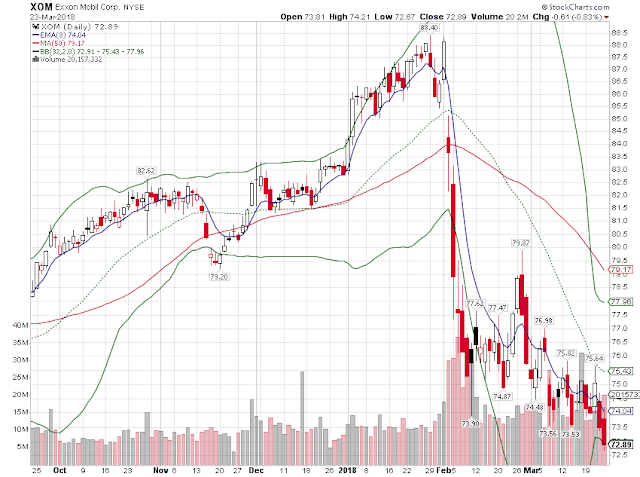 Of course, to further understanding the magnitude of this evening, look at this NASDAQ chart. 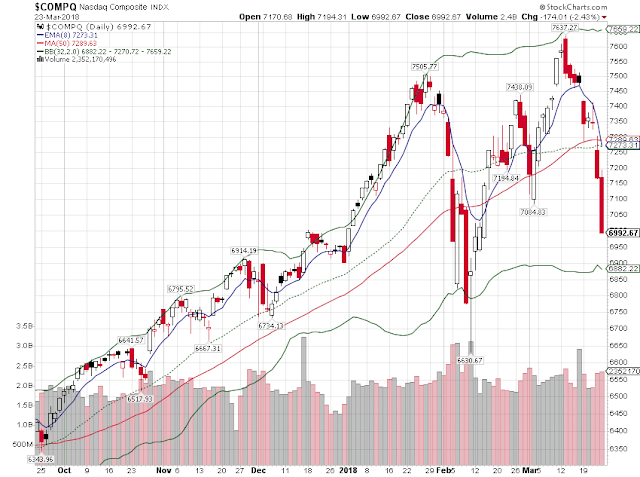 Look at the above NASDAQ chart carefully. Those LONG RED CANDLESTICKS  will get much longer and more frequent over the coming weeks and months. I repeat, THIS IS NOT A PULL BACK OR CORRECTION, THIS IS A SYSTEMIC COLLAPSE! The system is broken beyond repair.  If you STILL doubt this truth, it will not take long to see the evidence. A fiat currency (like the US dollar) can not withstand the power of a gold-backed currency (like the Chinese yuan). History is littered with hundreds of examples like this.

Expect to see Russia, Iran or Saudi Arabia announce that they will no longer accept US dollars for oil. Gold is now the true reserve currency of the world AGAIN. From this point on, things will start happening much faster than most people expect. Dumping dollars will lead to dumping US treasuries, interest rates will spike which will lead to the collapse of the derivatives. This house of cards will collapse.

If you do not have cryptocurrencies or bitcoin NOW, your financial future is in serious peril.

EVERYTHING you need to know is contained in this blog. THIS is the beginning of the END.

Popular posts from this blog

How to Profit from Cryptocurrencies

January 10, 2018
The dramatic explosion in cryptocurrency investment is going to be with us for a while. Early adopters and investors will make fortunes. New digital currencies are being created daily by private entities and governments all over the world. This blog is your one-stop shop to get started in this exciting and rewarding event. Everything you will need to get started is contained within these posts and pages, so spend an afternoon and read through this entire blog. It will save you time and effort. We have provided what we refer to as " members of our preferred portfolio ."  These members are cryptocurrencies that should be in your investment portfolio. These are preferred cryptocurrencies that we hold and which we strongly recommend to our friends and family. At this moment, we PREFER Bitcoin, Ethereum, Electroneum, and Monero . We own and mine these coins; and, we consider them "long term" holds. As we find new cryptocurrencies in which we invest, we will share tha
Read more

WE WARNED YOU YESTERDAY! Now, it's time to LOOK OUT BELOW Yesterday, we warned that a market collapse could come on Friday (TODAY). Well, indeed, something went seriously wrong on the Toronto Exchange which could have easily spread like cancer throughout the western markets bringing everything down in a panic!  Read this article, NOTICE HOW VAGUE THE PROBLEM IS DESCRIBED, actually NO explanation at all! Now, IF you THINK this was an odd coincidence, you deserve to loose your assets! The warning signs are everywhere. And, the rigging of cryptocurrencies by Wall Street is self-serving to give these corrupt bankers a lifeboat while they let everyone else drown in this disaster! If you're NOT invested in cryptocurrencies, you WILL regret it very soon. The handwriting is clearly on the wall. Now, LOOK at this DJIA chart.... That's NOT a good picture! The US dollar was DOWN today against the Mexican peso, Japanese Yen, British Pound, Chinese Yuan, Canadian Dollar, Korean Won, Indian Rupee, and Eurodollar! PAY ATTENTION!  This cou
Read more

Bitcoin & Cryptocurrencies are NOT a fraud or a fad, THEY ARE A TREND ! **

January 03, 2018
Over the holidays, some news articles have surfaced that should grab your attention. These are very important hints to the future! Note also, today, the total market capitalization of cryptocurrencies surpassed $761 BILLION. Almost exactly a year ago to the day, that market cap was a mere $19.5 BILLION! But here's the holiday news you may have missed. First, Belarus has made Bitcoin legal as well as ICOs and mining.. Venezuela has begun a program to accept cryptocurrencies for oil. Russia is in the process of creating a sovereign Russian cryptocurrency, and just within the last day, the United Kingdom has admitted it is also in the infant stages of developing a sovereign cryptocurrency! This is now a genuine asset class that Wall Street and Jamie Dimon can not deny! They can mislead, malign, and lie all they want, but the facts are indisputable. Cryptocurrencies ARE the future. And this fact should be clear in your mind, the early adopters and investors will profit handso
Read more